Every once in a while, I find myself reading a book that sucks me in.  Sometimes, it’s a debut that wraps me up so thoroughly that I can’t believe this author doesn’t already have a dozen publications behind them.  Other times, it’s an author who delights me every single time.  These authors are the ones that inspired to try and pick up their next work.

If you haven’t read any works by these authors, or don’t have their debuts on your TBR, I  highly recommend them.

Charlotte Nicole Davis is my most recent contribution to this list.  I was lucky enough to meet her and have the opportunity to read her debut novel, The Good Luck Girls, early.  While this novel doesn’t come out until October, I feel very confident that this is going to be so well-received.  Her world building is remarkable, her ideas original and refreshing, and all of her characters really good.  She also interweaves diverse rep effortlessly so that the book never feels like it’s making a statement… this is just the way life is.  It’s perfect.

While I think part of the reason I loved Spin the Dawn so much was for its unexpected epic fantasy feel, I think we can looks forward to several more works from Elizabeth Lim with that same atmospheric depth and effortless mythological feel.  While her love story was a little cheesy, it was also sweet and endearing and her characters revealed themselves in layers that made them feel like real people.  Spin the Dawn is newly out in the world, and I can’t wait to see what Elizabeth Lim brings us with the next installment of The Blood of Stars.

With her debut novel, House of Salt and Sorrows, Erin A. Craig present herself as one of the most talented character writers debuting now.  Challenged with creating ten memorable characters, she created a diverse cast and as a character reader, I absolutely adored her book.  Needless to say, I’m looking forward to whatever else Erin A. Criag may have for us in the future, but it’s a brilliant retelling and I’m completely sold on her skill.  If you haven’t considered House of Salt and Sorrows, it’s a great one to add to your TBR.

Tamora Pierce was my first literary love.  I started her universe with Alanna:  The First Adventure and I’m still devouring her worlds, both in reads and re-reads.  She is not only one of the best world-builders I’ve ever read, but she also created so many women who I idolized throughout my childhood – Alanna, Thayet, Daine, Tris, Sandry, Daja…. they’re all incredible, strong women and ahead of their time in fantasy (let alone YA).  She continues to write incredible stories and I recommend her books so highly.

I was introduced to Douglas Adams by way of visual media first – I experienced The Hitchhiker’s Guide to the Galaxy in movie and mini-series format before picking up the books.  But I’m glad I did, because H2G2 is hilarious in its entirety.  His humor is spot-on to make me chuckle.  He was also absurdly creative.  I’ve read the Hitchhiker’s trilogy a few times, and i just got my hands on a copy of Dirk Gently’s Holistic Detective Agency earlier this year, so I’m pumped to read that as well (loved the TV show). 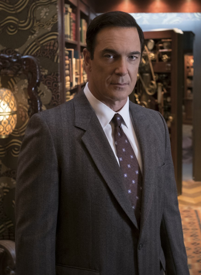 Okay, I know this is a picture of Patrick Warburton and that Lemony Snicket is actually Dan Handler, but I just deeply enjoy the Lemony Snicket writing style.  Also Lemony Snicket should be a cookie.  While I think A Series of Unfortunate Events went on too long, his voice is just so much fun, and it’s the same in the All the Wrong Questions series.  There’s something to be appreciate about pointing out that lemon meringue pie is delicious and never hurt a fly, and the stumbling adult characters in this series.

When I picked up Graceling, I had no idea what to expect.  I was coming off a run of mediocre fantasy YA all added to my TBR around the same time, and I was utterly unmotivated to read yet another one with a cheesy romance and tired tropes.  Not only did Graceling shatter my expectations, but I read it over a year ago now, and I’m still thinking about it.  I deeply loved the worldbuilding and the characters and her writing style.  I’m here for everything she writes.  It’s all on my TBR.

A.R Capetta writes the best sapphic romance in YA and now that so many people have read and loved Once & Future, would y’all please pick up Echo After Echo?  I will literally never stop shouting about this book.  She also does a really good job with atmospheric writing – in Echo After Echo there are so many theatre vibes and it was AWESOME.  Then in The Lost Coast the Pacific Northwest witchy feels were strong.  Her contemporary is highly underappreciated, possibly because it’s coming from a small press, but it’s her contemporary that I love the best.

It’s weird for me to say “I love Rachel Hartman because of Seraphina” because I love her the most because of Tess of the Road.  I read Seraphina shortly before Tess went live for requests on NetGalley, so her unique and beautiful writing was still fresh in my mind.  So I requested Tess.  And you guys know how I feel about Tess of the Road.  Rachel Hartman creates characters with such depths and strength and emotional vulnerability and I’ve never read anything quite like it, especially in fantasy.

I think a lot of people feel this way about Erin Morgenstern.  The Night Circus captivated so many people of so many ages.  And why wouldn’t it?  She wove in vibes of Something Wicked This Way Comes and a beautiful love story and that childhood thrill of the impossible at the circus.  It’s atmospherically one of the best books I’ve ever read.  And like everyone else, I pre-ordered The Starless Sea the moment it was available.  Can’t wait!  If The Night Circus is any indications, we’re in for a treat with her next book.

What authors do you always read and recommend?

Short answer: My primary recommendation is easy – I love Tamora Pierce, and I find fewer and fewer people have read her, especially many of the up and coming young bloggers who are still in high school.  She was my first love and my first recommendation every time.

Do you have any insta-buy authors?  I know Leigh Bardugo, Holly Black, Cassandra Clare, and V.E. Schwab are common ones in this community – any others?  I’d love to hear about them!

Have my trusty phoenix fly all the latest posts right to your doorstep!

Bonjour mes chers! How is life treating you this N

A refreshing Middle Eastern mythology with a compl

Erin A. Craig always keeps me guessing. Loved the

Hello fellow readers! How are you all doing today.

Beautifully written, heartbreaking, and moving. As